I had long heard about La Villa dei Misteri. For years it had been under restoration and its location at the world’s most famous archaeology site is in a remote corner.  This day, however, was different.  Restoration complete, the sun was shining and it’s springtime in Pompei so I ventured to explore this true ancient treasure, off the beaten path.

The Villa dei Misteri is as much a part of the Pompei puzzle as any other remote corner of this city buried under a volcanic ash cloud nearly two millenia ago.  The Villa was a sprawling complex in its day.  It was believed to have 90 rooms and its owner was thought to be a successful wine producer.

Yet, what went on behind closed doors is where the complex derives its name from the sensual mystery of the languid spa and dance scenes which line its walls in colorful frescoes.  The predominant color is always Pompeiana red and the vivid wall paintings are believed to decorate an ancient triclinium.  This room was a cross between a dining room and a spa lounge.  Think house boys peeling grapes for the women of the house on reclining chaise lounges more than 21st century upright and uptight table and chairs. 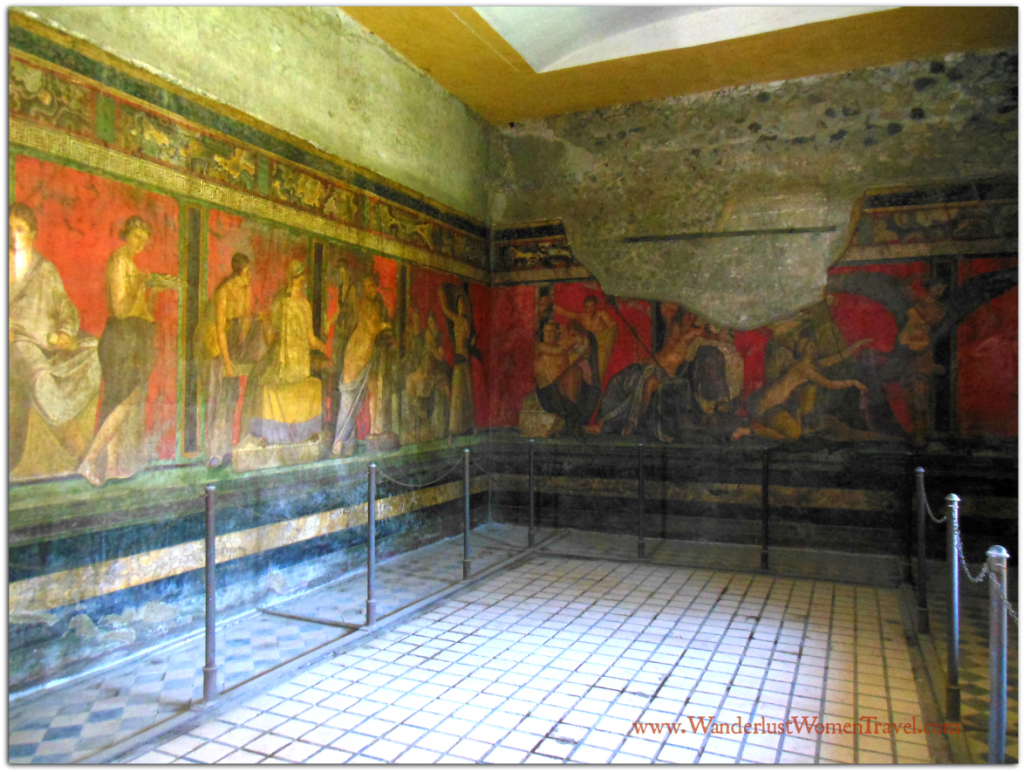 The frescoes themselves have been the subject of great debate with so-called experts positing everything from sensual cult initiation rituals to newlywed preparations of a young bride.  Enter its mystery and you are once entranced, imagining the men and women who dined here, loved here and died here at the hand of God.  Yes, bodies were discovered at the Villa and plaster casts made of their remains, forever preserving them at their moment of extinction.

La Villa dei Misteri is generally not on the routine Pompei tours but it’s so worth the effort it takes to get there.  The real mystery to me is how the Villa of the Mysteries survived for 2,000 years buried in meters of ash and why the world doesn’t truly appreciate the greatness of Pompei’s continued existence.  Let’s save our treasures.