My fascination with architecture began by watching my Dad turn a bunch of lines on a paper into a living breathing home.  Yes, buildings live and breathe and become a part of their surroundings as their surroundings envelop them.  It was an art form whose genesis blossomed under Frank Lloyd Wright, perhaps one of the world’s most renowned architects, and gave birth to a movement.  So, to say that I dreamed of seeing Wright’s iconic Fallingwater house from the moment I was bitten by the travel bug is an understatement.  It was a bucket list item before there were bucket lists.

So, over the river and through the woods I drove, from New York to Pennsylvania, never realizing how large Pennsylvania is until I had to drive across the entire state.  The Fallingwater quest had me in the car for over eight hours but I was a woman on a mission for this weekend escape.

I checked into the NexttoKnob Cottage at Kentuck Knob, another nearby Wright-designed home.  I was gearing up for the big event the next day. 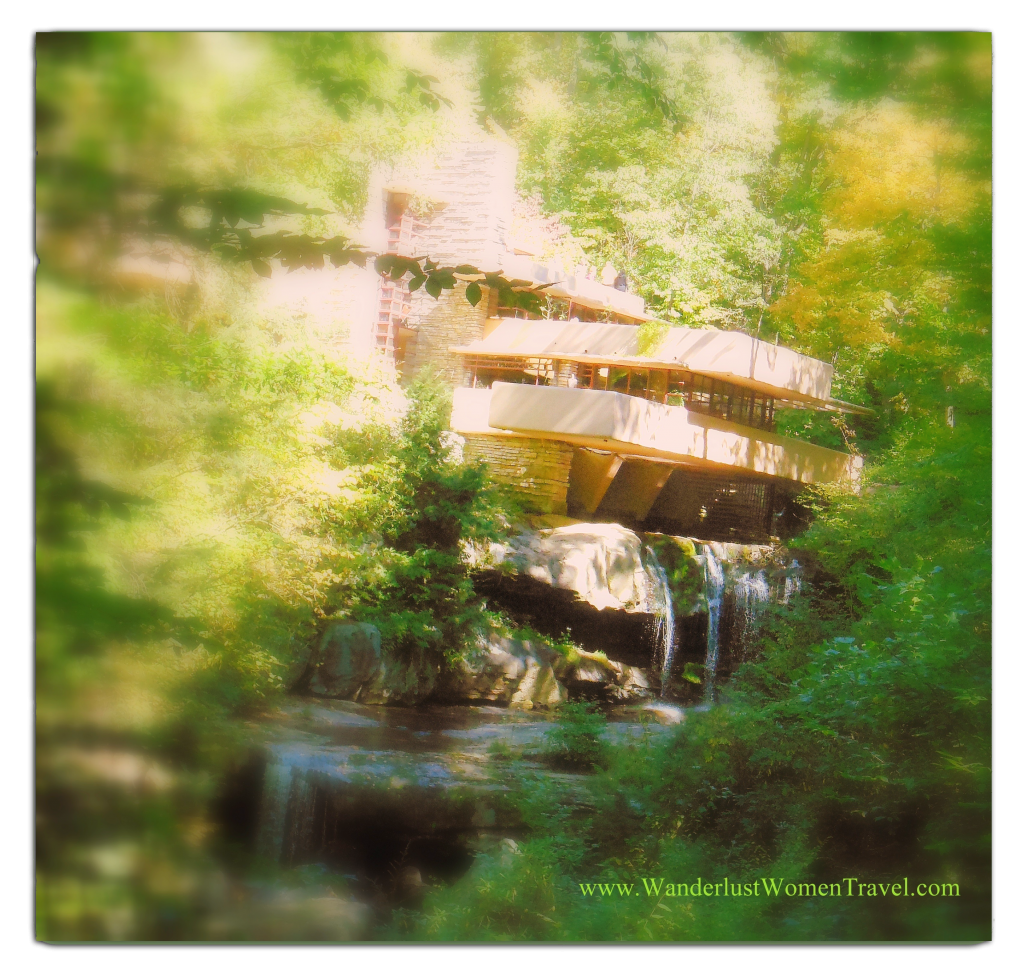 It’s a magical place.  You feel the energy change, becoming light and ethereal the moment that you cross the footbridge to the ticket booth.  You’re at once very aware of the beauty of nature as treetops shade the ticket area.

Crossing the next bridge, further into the woods, conjuring images of what lies ahead.  Then, in one breathless moment, there she is, the most beautiful house ever built, the 80-year-old Fallingwater, where a cantilevered living room hangs precariously over a cascading waterfall.  It lives on water and is refreshed by the outdoor breeze.

I was in awe.  It was more beautiful and magical than I imagined and it was as if my Dad was right there with me, looking down from the treetops.

Fallingwater changes with the seasons and reflects the colors around her.  While Frank Lloyd Wright insisted on a restricted color palette of light ochre and his signature Cherokee red, Fallingwater can’t help but put on a new coat for the greening of spring or the sunset of autumn.

There’s a spot in the woods where visitors gather to take that picture perfect postcard.  Yet, no matter how many millions of people stand in that exact same spot and take a photo, no two will ever be alike as Fallingwater lives and breathes and hangs on the ever changing cascade below.

TOURIST NOTE:  Fallingwater is open all year except Wednesday.  You can buy tickets, in advance online, as peak times may be booked.  Prices range from $25-122 depending on the type of tickets with some including brunch and sunset settings.