A walk through literary London must include a stop at Carlyle House, the home of the most influential British author you’ve probably never heard of, or have you?  Scottish born author Thomas Carlyle was the leading literary lion of his day, friends with the likes of Charles Dickens, Alfred Tennyson and Robert and Elizabeth Browning.  He paved the way for a move to Chelsea in literary London by dozens of writers who are more well known and more well read than Carlyle will likely ever be.  He was a curmudgeon who helped establish the London Library because he loathed the overcrowding and inadequacies of the British Museum Library.

As a visitor, step one foot into his former home at 5 (now 24) Cheyne Row in Chelsea, and travel back in time as you walk through the front parlor and up into Carlyle’s writing room. It’s only then that you realize the scope of his influence on Victorian society.  A plaque commemorating his 80th birthday in 1875 was signed by Victorian artists, scholars and literary elite including Charles Darwin, George Eliot, Robert Browning and dozens of notable Londoners who respected and admired his historical contributions.

As an author, to be in the space of such literary influence is inspiring.  As a tourist, to be in the relatively unchanged home of one of London’s literary giants is to time travel to a society at war with itself, a society combating its ultra conservatism in the face of an industrial revolution like no other.

Carlyle was a philosopher, essayist and historian who thrived on sarcasm and criticizing London society and its mores.  Yet, as curt and biting and overly disagreeable as Carlyle could be, Victorian London longed  to be in his company.  It was at the Cheyne Row house that Carlyle and his wife Jane would entertain many of literary London’s luminaries.  He became known as the “Sage of Chelsea.”  His relationship with Jane was a tortured, albeit, devoted one.  They aired their well known arguments on all manner of squabbles from domestic to society at large by writing to each other.  More than 9,000 letters between them have been published, revealing the cherished but strife-torn marriage. 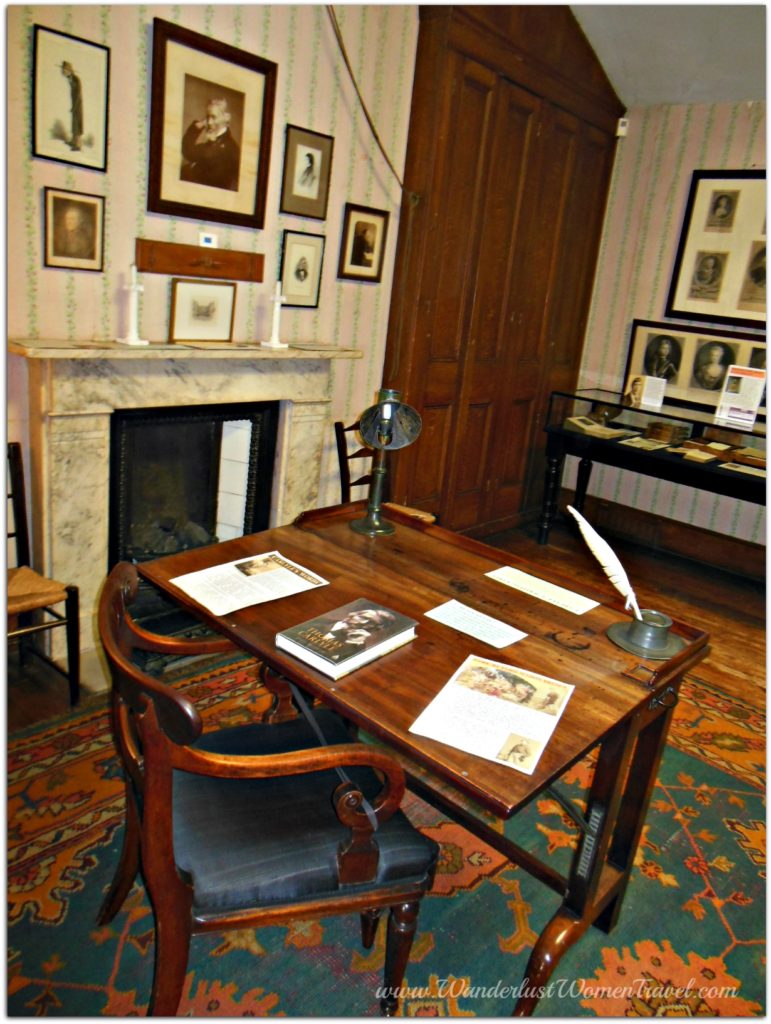 Carlyle House, now a museum under the guidance of the National Trust, at once reveals the busy but isolated life of this author who held most relationships at a distance.  His single mindedness to his work can best be displayed by the writing of his most notable three volume work on the French Revolution in 1837.  Carlyle had just finished the first volume when the completed manuscript was accidentally burned by the maid of fellow philosopher John Stuart Mills.  There were no photocopiers or digital files back then so what was Carlyle to do?  He wrote volumes two and three before rewriting the first volume from scratch.  As an author, I think I would’ve crawled up in a ball and cried endlessly in a corner.

The knowledgeable staff at Carlyle House are friendly and eager to help visitors understand the mystery of the man most influential to Victorian literary London.  Your visit through his private world is not rushed and you are encouraged to enjoy Thomas Carlyle’s private garden.  It’s a peaceful place to rest and think about what it was like for the man who steered society through its rapidly changing protocols.

TOURIST TIP:  Carlyle House is opened to visitors Wednesday through Sunday and bank holiday Mondays. Tickets are £6.50/adult and £3.25/child.

GETTING THERE:  Cheyne Row is in a residential area of Chelsea without a nearby tube.  It’s just off the Chelsea Embankment, just northwest of the Albert Bridge.

Our London travel specialist can personalize a tour of literary London just for you!