Rome’s Dar Poeta Pizzeria (Vicolo del Bologna, 45/46)  is somewhat of a legend with viewers of American travel TV but ask around Rome and most don’t know about this ristorante in the trendy Trastevere neighborhood of The Eternal City.  There were stories of mythic lines around the block for dinner, so this Italy foodie decided to head there for lunch on a sunny day.  Any reason to roam around Rome on a sunny day, in search of great pizza, is good enough for me. 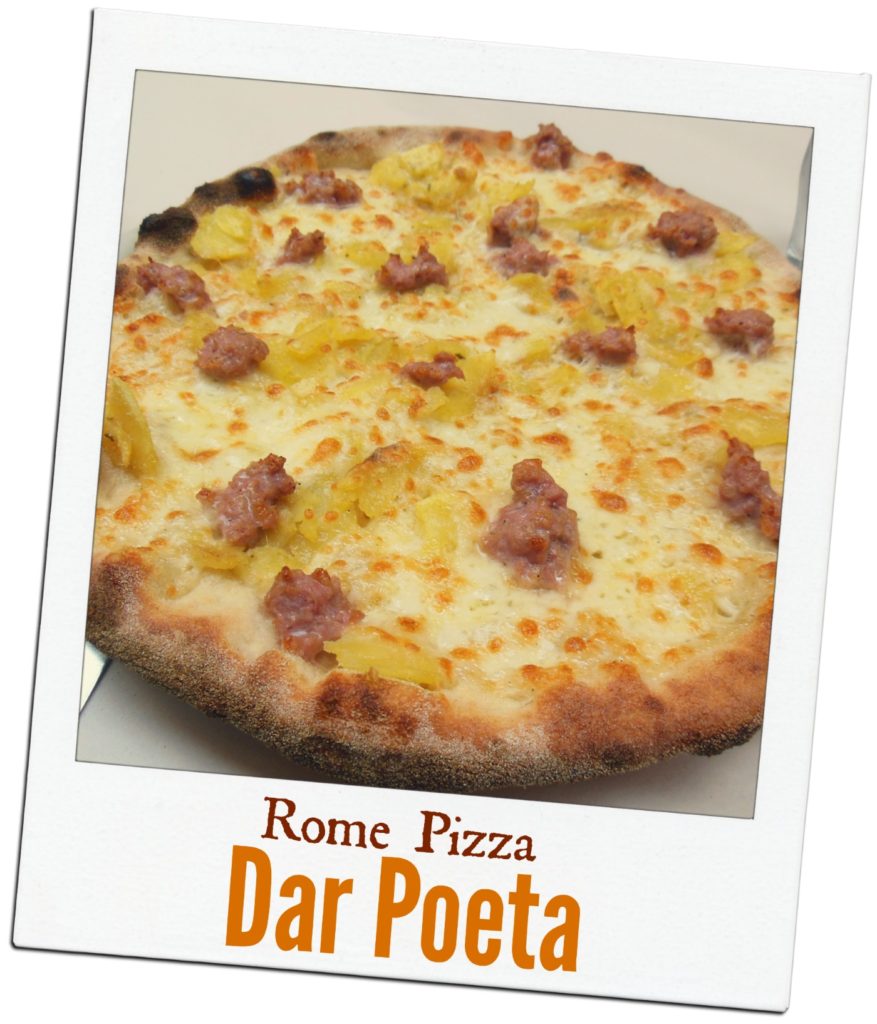 It takes a bit of sleuthing to find the tiny eatery tucked on a side street somewhere between where the Ponte Sisto crosses the Tiber River and V. della Scala.  Its unassuming storefront is only wide enough for a handful of tables but no worries, the staff will always drag out an extra table from indoors and make space along the building’s front.  After all, this is Italy and they’ll do anything for food, especially pizza.

The pizza menu was different and extensive with no less than 32 varieties, not to mention bruschette as well.  The menu was not the traditional Margherita or Marinara, although those are available, but nuova pizza like Capperoni with capers, alici & olives or the Patataccia with potatoes and sausage, which is what I ordered.  The pizza is a bit larger than I can manage at one sitting but when in Rome, screw the carbs, right?

The wood-fired pizza had a crust that was not too thick or too thin.  Just right.  Yet, the pizza topping was rather bland and I found myself adding a lot of extra salt and pepperoncino.  Yes, I like spicy but I was starting from bland and working my way up, way up!  Maybe I ordered a bland pizza.

So, what’s the foodie verdict?  Would I go back?  I am sure there are many other places for pizza in Rome that I have yet to try but there is something about Dar Poeta that would have me return.  It’s a great place to people watch off the beaten path in Rome, tucked into a slice of Trastevere.  The total tab for pizza and a bottle of water with tip came to under $13.50 and with any luck, you’ll see the artistic, eccentric elderly neighbor watering her plants in sparkles and mules.  Gotta love Rome, for pizza or anything else!