Step a meter in any direction and you can literally enter another world, another time, another experience to savor in Italy. It’s the off-the-beaten-path adventures like The Bourbon Tunnels (Vico del Grottone, no. 4, near Piazza del Plebiscito) which make exploring centuries old cities like Naples exciting. The Tunnels, which have served as a royal escape route and a military hospital over the past 160 years, are now open by reservation to adventure seekers, like my new fictional protagonist in the first of the Mickey Malone Mysteries, “Shrouded in Pompei.”

Check out this excerpt:

“Pick your poison. Simple walking tour? Zip lining across ancient aqueducts? Or sailing under the city?”  Mickey suggested to her friend.

“Are you serious? You’ve been hanging around heat-seeking Marines too much this week.” Lyn was hesitant but still in the game, warning her friend that she was not up to the rigors of boot camp at Parris Island. 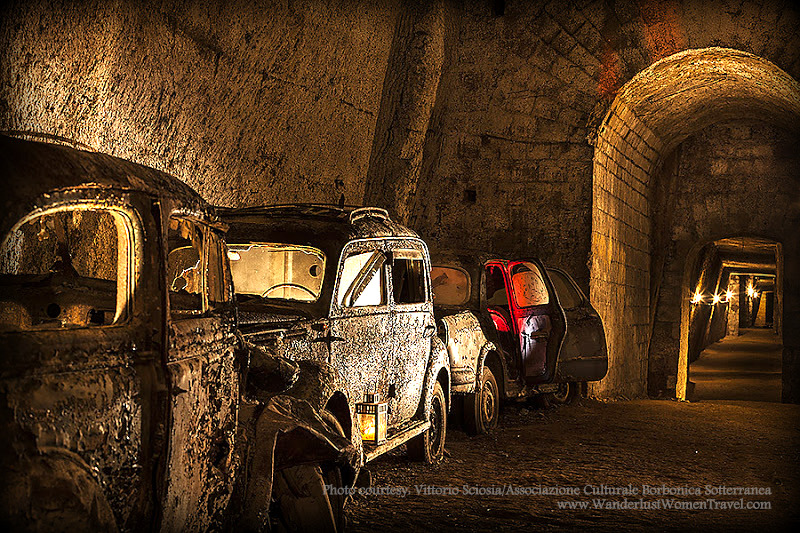 Their infectious laughter echoed off the cavernous stone walls of the Bourbon Tunnels as they hopped aboard a raft like Tom Sawyer and Lyn nearly slipped again into the muck. The tunnels were dark and dank. They could feel the damp in their bones and taste the mildew in the air. The light from their torches and a few precariously mounted ceiling bulbs highlighted the sheen on the walls where water still trickled in and bats hovered in the black nooks overhead.

“If one of them ruins my great hair day, there will be hell to pay,” said Lyn, shrinking back from the eyes peering through the dark cavern overhead. 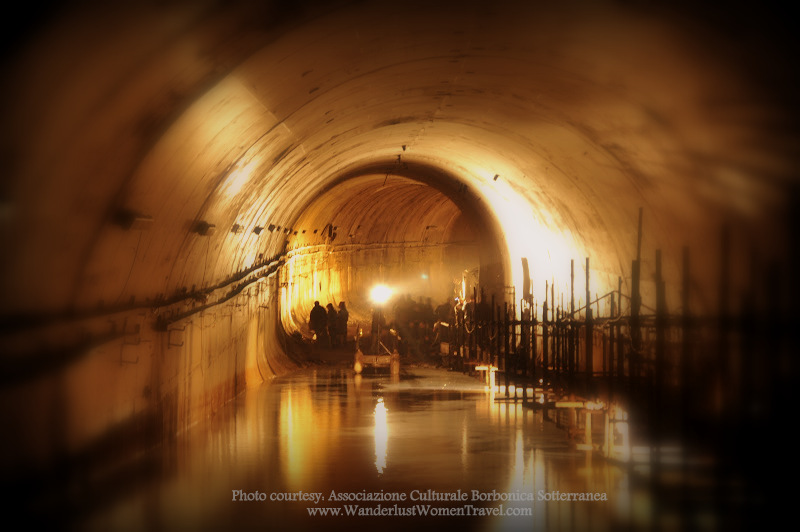 “Ewww, whose idea was this anyway?” Mickey now questioning her suggestion but happy for the offbeat diversion. She was away from the murder and politics which chased her like a fog across the ocean. Sailing across old sludge in the netherworld placed her out of the reach of most. There were no bars on her cell phone this far underground. Neither the sunlight nor the world above could penetrate. She relished the Italian way of honoring Sunday as a day of leisure and meant to make the most of it, stepping off the beaten path.

This was the mystery of Naples, the city of contrasts, where the nefarious and bright had commingled above and below ground for centuries. Here, dust-covered cars and motorini remain parked where they had been since World War II. Folding beds pushed into corners along with handwritten notes from the ghosts of the city’s war-torn past, the secrets tucked away for decades. It was a subterranean treasure trove and a day well-spent exploring Naples’ funky underbelly.

You can find out more about the Mickey Malone Mysteries by clicking here.

Tourist Note: If you’re looking to fly by the seat of your pants or row your way past decades of history and dusty relics, you can visit the Bourbon Tunnels weekends during the summer and Sundays during the off-season. Book ahead because it does get busy.

4 thoughts on “The Bourbon Tunnels of Underground Naples”