The archaeology of Malta attracted me long before I had ever visited.  I think I was always intrigued by a Mediterranean island, with diverse influences, where English was one of two official languages.  The island nation was a British colony until 1964.

So, my first visit to Malta found me heading off the beaten path and underground.  First stop was the ancient Hypogeum, the only prehistoric, underground structure in the world . . or that has been discovered yet!  I felt special as only one of 10 people allowed entry during the first hour of the morning.  Entrance to the site is booked well in advance because visitors are limited to control erosion by human contact with the ancient world.

Slowly we descended, 11 meters (approx. 36 feet) below ground into a labyrinth of alcoves and temples, some with fresco designs still visible.  This was believed to be a combination burial ground and place of worship.  The history is a true mystery because it dates from 2500 to 3000 B.C. and no written language exists from that period.  I wondered how these ancients carved each niche…..drilled each perfect hole…..with only the use of stone and antler-hewn instruments…..and with the dim light of torches.  It’s fascinating.  It’s also believed to be haunted which adds to its allure for me. 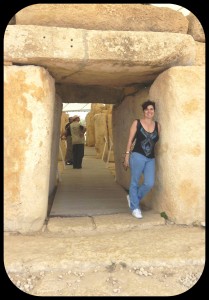 Next stop were the temples of Hagar Qim and Mnajdra on the southern end of the island of Malta.  These neolithic structures predate the Great Pyramid of Giza in Egypt, making them even older than the Hypogeum by at least 300 to 500 years.  They are thought to have been used to pray to a fertility goddess but again, the absence of any written record makes such determinations only educated guesses.

The altar stones and statuary have long-been removed to the Malta Museum of Archaeology.  The structures were built out of ancient limestone dating from Oligocene and Miocene periods, that’s millions and millions of years ago.  So, now the site is protected by a canvas awning and left open at the sides.  Visitors may easily access Hagar Qim but those wanting to explore Mnajdra should understand that you must descend approximately one kilometer 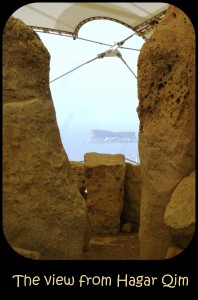 (1/2 mile) on foot to reach the temple…..which also means you must climb 200 meters to return to your car.  The temples are almost identical so only the fit may want to make the climb, especially on a hot, Mediterranean day as there is no shade on the cliff.

I squeezed a great deal into my first visit to this country rich with ancient wonders and I am sure that I have more yet to explore off the beaten path in Malta.

TOURIST TIP:  The Hypogeum is centrally located in Paola and must be booked well in advance.  However, the Temples at Hagar Qim and Mnajdra are quite off the beaten path in Qrendi.  You may catch a bus from Valletta’s central terminal direct to the site if you do not have a car.