As much as Frank Lloyd Wright changed the face of American architecture, the same can be said of Ernö Goldfinger to London architecture.  The Hungarian born architect and furniture designer introduced the modernist movement to western Europe, specifically London, on a grand scale from the moment of his arrival in the 1930s.  Goldfinger met and married gourmet grocery heiress Ursula Blackwell and built three houses (including his own) in London’s tony Hampstead neighborhood at 1-3 Willow Road with Goldfinger’s located at 2 Willow Road. 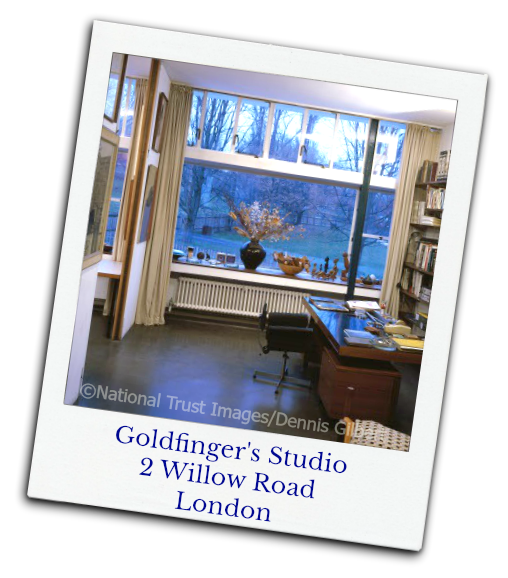 Goldfinger’s design for the trio of semi-attached buildings blended all of the elements of early 20th Century design from art deco to brutalist and was not without controversy.  Area residents objected to the demolition of pre-war cottages on the site and criticized the eventual design of the Willow Road homes as out of character with the surrounding older buildings.  The red brick facade covered the reinforced concrete structures, which Goldfinger became known for as he designed tower flats in post WWII London.

Goldfinger was a tall, imposing man said to have a stern disposition with little sense of humor, so much so that author Ian Fleming named one of James Bond’s most notorious adversaries, Auric Goldfinger, after him, causing a further rift between the contemporaries.

The Goldfingers were noted for entertaining and they amassed a notable collection of 20th Century artwork by some of their friends and others who often visited.  Visitors can see originals by Henry Moore, Max Ernst and Fernand Léger displayed as the Goldfingers desired.

Walking through Goldfinger’s home at 2 Willow Road is very much like calling on an artist who just stepped out for a minute.  The home is pretty much in the same condition as when Goldfinger died in 1987 and his family sold it to Britain’s National Trust in 1995.  The architect’s studio, furniture he designed just for the space, even his clothing in the closest remain as it was, a time capsule to an innovative creative force in London architecture.

TOURIST TIP:  2 Willow Road is opened to visitors Wednesday through Sunday and tickets are by timed entry.  Guided tours are given on the hour while you may enter and explore freely on your own between 3-5pm.  Tickets are £7.20/adult and £3.60/child.

NEAREST TUBE:  Hampstead on the Northern Line.  2 Willow Road is a short 10 minute walk from the station.

to explore London’s architecture and so much more!