A long, long time ago in a galaxy far away……..there was a young student who lived in London.  Whenever she was homesick, she sought solace in the old Church of Christ the King in London’s Gordon Square. 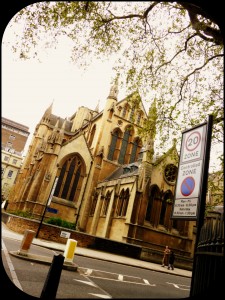 This small corner of Bloomsbury was home to me for a semester and so it was that I discovered this wonderful mid-19th century church designed by Raphael Brandon.  It is constructed of the lovely ocher-colored Bath stone, which makes it warm and inviting despite its massive size.  The main nave is only 13 feet smaller than the massive Westminster Abbey.

I discovered it one day while roaming home and was enchanted by its gabled spires and corner turrets.  I entered its open door and found the most lovely chapel to sit and contemplate life, as only a 20-year-old can do, full of angst and awe.  The chapel’s walls were lined with little seating nooks to hold only one person, as if enveloping them in their thoughts and sheltering them from the outside world. 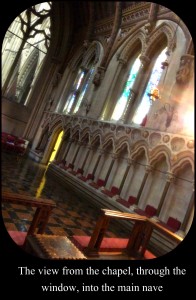 I still return home to this chapel each time that I visit London and it made me smile, on a recent visit, to see a young student meditating in her nook, focusing on her life, as I had done so many years earlier.

The Bloomsbury Group was born around Gordon Square. Celebrated author Virginia Woolf and friends, along with economist, John Meynard Keynes, would gather for frequent discourse in several of the many town-homes lining this corner of literary London.  Neighbors such as Charles Dickens lived on the east side of the Square in Tavistock House.

London has so many treasures, off the beaten path, and it often takes living as a local to uncover some of the best spots, as in the Church of Christ the King.

When you’re ready to travel to London, our UK travel specialist is ready to help. . .or book London tours and transport here.