Restaurant owners the world over seem to take advantage of tourists and abuse solo diners.  I found Venice to be no different as I perused the side calles off Piazza San Marco in search of a reasonably priced restaurant.  I ventured into three, asking each cameriere outside if I would be charged coperto, which is a useless fee that restaurants use to justify stale breadsticks or a view.

Each invited me inside, saying no coperto just for me.  In the first two, this single traveler was given the worst table in the middle of the traffic flow or entryway.  In the third, the menu was so filled with junk that I pitied the unknowing tourists who would consider this fantastico. 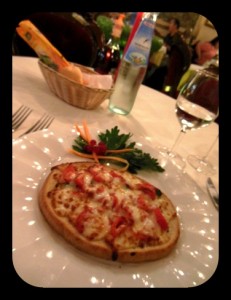 OK, one more shot before I pick up a birthday panini and return to my 5 star hotel.  This time, the name called to my Napoletana soul, La Nuova Grotta (Castello 4538 – 30122 Venezia).  The cameriere outside assured me no coperto and once he learned that it was my birthday, he took my arm and escorted me hand in hand to a banquette in the middle of the restaurant.  It was the best table in the house and could easily seat four or five people but they graciously allowed this solo diner to eat there.  Now, this was looking promising.

The staff makes this restaurant but that is not to under-rate the food. Before I could even open the menu, a complimentary glass of Prosecco appeared with cheers of auguriiiii.  I wish I had found them the night before.

I ordered a bruschetto appetizer, which was more like a mini pizza than the traditional bruschetto, of toasted bread topped with chopped tomatoes and seasoning.  I requested that spaghetti replace tagliatelli offered with gamberoni and cacioffi (shrimp and artichokes) and it was awesome. Spaghetti cooked to perfection with six medium sized shrimp which I did not have to hunt for.  Tutto perfetto.

I did not order dessert because the tray looked rather ordinary with tiramisu, torte caffe e strudel. Not my idea of super dolce.  I paid the check, happy at only €34 inclusive of 15% gratuity (approx $44).  I said goodbye to Venice that night, but not before the camererie escorted me out, placing una biscotti in una bolsa mia.  Friendly staff and great food at fantastic prices in Venice – truly a rarity so close to San Marco.

TOURIST TIP: Lesson learned – three out of six restaurants which I asked waived the silly coperto upon query……the only ones who did not were those which fronted the canal.  It figures!

Let us help you find a great hotel in Venice.

3 thoughts on “Mangia Monday at Nuova Grotta in Venice”